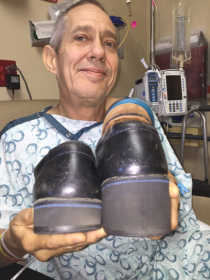 It was a surgery 45 years in the making. But the results were worth the wait.

Randy “Griff” Pickett recently traveled from south Kansas City, Mo., for a life-changing orthopedic surgery at Fitzgibbon Hospital. The surgery not only gave him a new knee, but it also lengthened his left leg by almost four inches, relieving him of a disability he had endured for the last four decades.

When Griff was only 20 years old, he worked for a Kansas City-area sign company owned by his grandfather. He was working in a ladder truck almost 43 feet in the air when all 20 bolts on the ladder basket snapped, sending Griff hurling to the ground and shattering both of his legs.

“Three days later I woke up in the hospital, wondering where I was and how I got there,” said the retired traveling salesman, now 65 years old.

The accident and subsequent healing left Griff with a permanent disability – one leg that was four inches shorter than the other. As he compensated for the differing lengths of his legs, over time, his uneven gait caused his knee to ‘wear out’ more quickly and his left leg to develop a slight bow outward. He walked with his shorter leg poised in a tip-toe manner. And he wore four-inch lifts in his left shoe.

“He had a very bad limp. He couldn’t go dancing or ride a bike,” said Griff’s wife, Janet.

All that changed the day of his successful knee replacement and femur reconstruction at Fitzgibbon Hospital in Marshall.

It is no coincidence that Griff sought out Clint Pickett, D.O., of Marshall Orthopedics & Sport Medicine to perform the surgery.  Dr. Pickett and Griff are first cousins. The two also have another tie to the area:  Marcia Picket Gorrell, a familiar name in the local agricultural community. The former agricultural journalist and Marshall resident also is a first cousin. The trio of Picketts all converged in a room at Fitzgibbon Hospital to celebrate the surgical success.

“This time I woke up to a familiar face,” grinned Griff, as he remembered his first post-operative moments, comparing them to when he awakened after his accident some 40 years ago.

“Clint’s first words to me after the surgery were, ‘I hit a grand slam, Janet. His legs are even again,’” recalled his wife of nearly 20 years. “I got to hug the doctor after the surgery – not just shake his hand.”

The knee replacement surgery, which lasted about five and a half hours, involved placement of a prosthetic knee joint and a rod inserted into the femur shaft, which is the long bone of the leg commonly referred to as the thigh. The additional length created by femur reconstruction resulted in two legs of the same length. Via the surgery, Dr. Pickett also was able to slightly rotate the joint, correcting the angular joint differential, minimizing the prior “bowed” leg.

When describing the feeling of satisfaction after completing Griff’s surgery, Dr. Pickett said, “This one has to be in the top five (surgeries) I’ve performed.”

Griff glowed with praise when he talked about his doctor.

“This was a surgery – to be sure – that I don’t think most city doctors even know how to do,” said Griff of his cousin, noting that Dr. Pickett is also an American Osteopathic Board of Orthopedic Surgeons (AOBOS) examiner, meaning he “tests” the other orthopedic surgeons who sit for their medical board certifications. Such a designation is achieved by a very small percentage of only the most skilled physicians.

“Everyone asks me, ‘Why did you go all the way to Marshall?’ ” said Griff. “And I tell them, ‘Because that’s where the best doctors are….the best doctors, the best facility and the best staff.’ ”

Griff made certain to make a special note of the the exceptional education he got at Fitzgibbon from his physical therapists and the consistent and caring nursing staff. He said those two components of his care were just examples of the exceptional overall orthopedic experience he had at Fitzgibbon.

“The quality of the care here, in my opinion, is second to none,” said Griff.

While Griff says he was most pleased with both the excellent care and a successful outcome to his surgery, being cared for by family has been a bonus.

“The fact that our last names are the same,” he said, “that’s icing on the cake.” 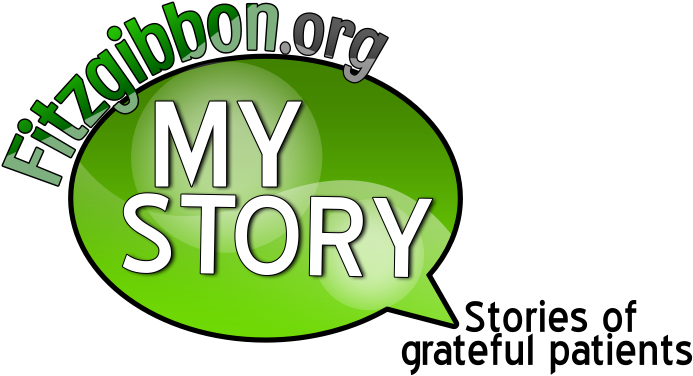