Stroke is tough, but Rehab is Successful for Heying 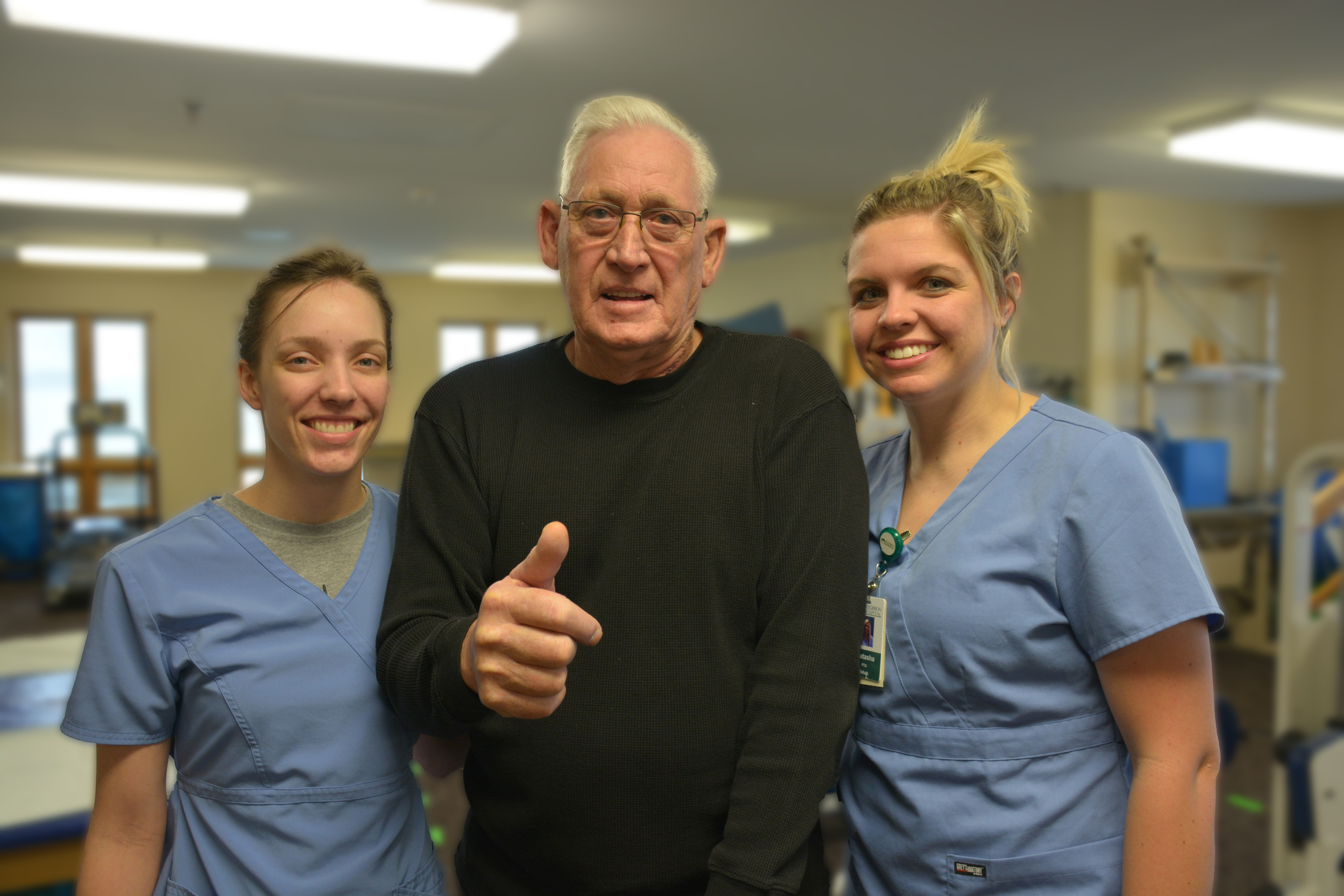 Few things are more terrifying than waking up and not being able to move.  Such was the case for Marshall resident Carl Heying, who was completely unable to move his right arm when he awoke one Monday morning several weeks ago.

“I woke up, and my arm was limp like a noodle,” said Heying.  “I couldn’t use it at all.  It was just hanging there. When I tried to make coffee, I had to lift my hand and set my arm on the counter.”

Heying was used to being in control of his hands and arms as a retired, over-the-road truck driver. You can imagine the inner struggle that Heying was going through as he tried to figure out what was going on. Then his condition worsened.

“Monday evening, I lost the ability to move my right leg.  I told my wife that she was going to have to take me to the hospital because I was having a stroke or had a stroke,” said Heying. “They got me right in, and it probably saved my life.”

Doctors attended to Heying in the ER before moving him to ICU to continue to assess his condition. Doctors determined that Heying had experienced a stroke that morning, causing him to lose the ability to use his right arm. Then later that evening, he had a transient ischemic attack (or TIA), which is commonly labeled a “mini-stroke,” which caused deficits in his use of his right leg.

Heying was moved from ICU after a few days of care to the Medical/Surgical area at Fitzgibbon Hospital. He then released to the Skilled Nursing Unit at The Living Center to continue his recovery.

That’s when his life took a course for the better.

“I told the physical therapist to not take any pity on me. I want to get better,” joked Heying.

“When Carl first got here he had to utilize a walker to get around,” said Natasha Collins, Physical Therapist Assistant with Fitzgibbon Rehabilitation Services, one of two therapists assigned to his care. “As we worked with him, we transitioned him to a quad cane. Then we started practicing with no assistive devices at all. That way, when he got home, he would not need to use one.”

Heying credits the intensive therapy he received for jump-starting his recovery.

“My leg just keeps getting better. I keep working at it, and I have gotten just about everything back,” said Heying, who now walks completely unassisted.

After two weeks of therapy, Heying was released from the skilled nursing unit to his home, but his therapy work was not complete.  His occupational therapy continues on an outpatient basis with Fitzgibbon Rehabilitation.

“The first day that I met Carl in the ICU, he had absolutely zero use of his right arm or hand. In talking with him and asking him questions, I began to tailor a care plan just for him,” said Misty Teel, Certified Occupational Therapy Assistant, COTA/L for Fitzgibbon Rehabilitation.

One thing that made the difference for Heying is how motivated he was to do the work, even when it was tough. His therapists say his positive and jovial attitude helped his recovery. But Heying has nothing but high remarks for the two therapists.

“Natasha worked on my leg, and Misty continues to work on my arm. I really cannot say enough good things about the care I have received throughout the entire hospital, from the ER to the skilled nursing unit and therapy,” said Heying.

The therapists say patient self-motivation to push themselves to get better is key to a faster recovery.

“The more motivated the patient is, the more we can help them. With Carl, he has such a fun personality. He is a jokester, and we found the more we joked with him and connected personally, the more he was able to accomplish,” said Teel. “Because of that personal connection and his motivation, he has now regained the use of his shoulder, elbow and is able to pick up objects.”

“We just loved working with Carl.  He has a fun spirit and is such a great guy,” said Collins.

A stroke is a life-threatening occurrence and requires immediate medical attention. If you suspect you may be having a stroke, you are urged to call 911 immediately. If you have suffered a stroke, injury or medical condition that requires physical, occupational, speech or aquatic therapy, the staff of therapists at Fitzgibbon Rehabilitation is available to assist.  Fitzgibbon Hospital also offers cardiac and pulmonary rehabilitation services through the Buckner Wellness Center. Call (660) 831-3236 to learn more about how Fitzgibbon Hospital can help you recover. 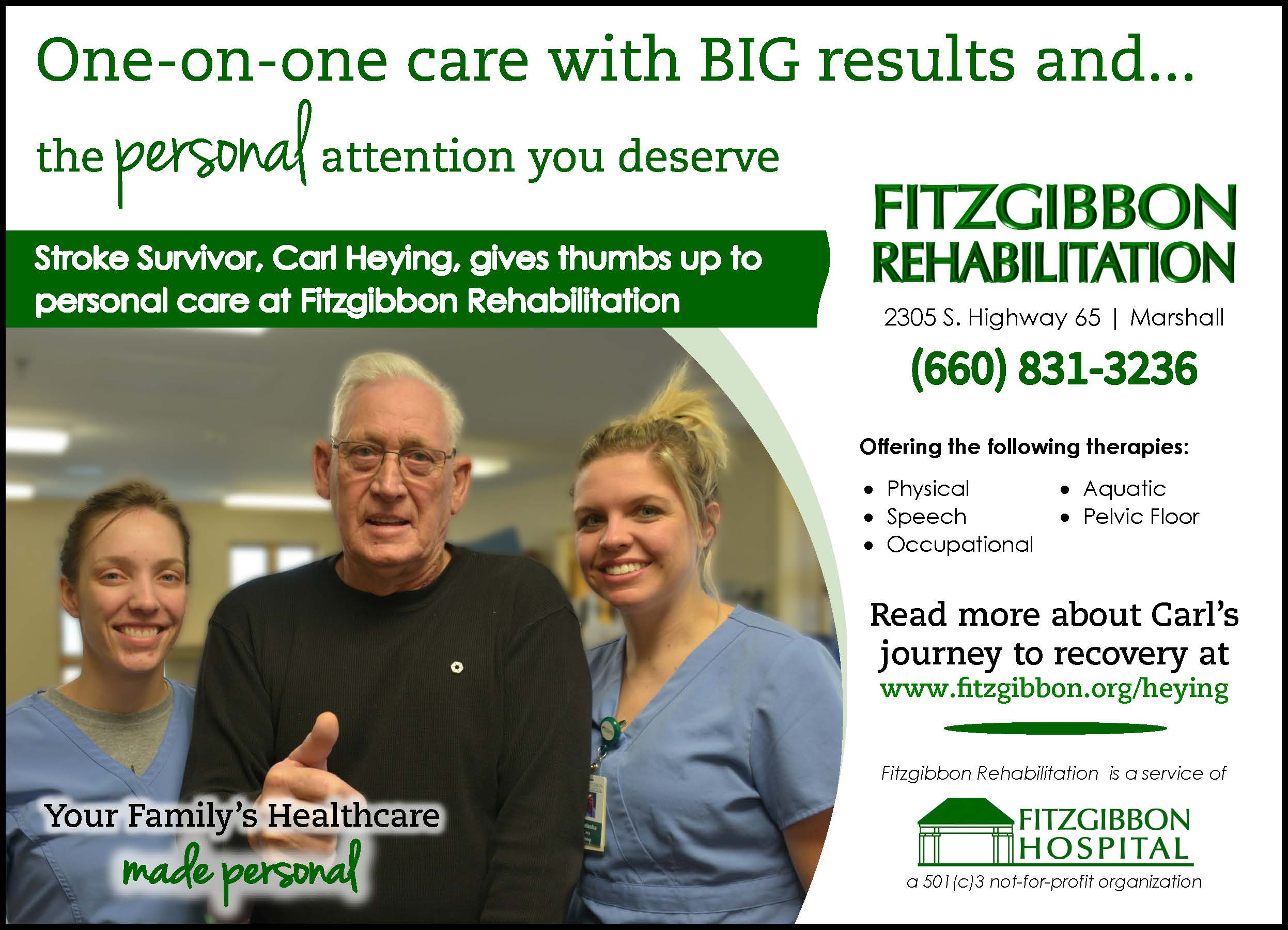