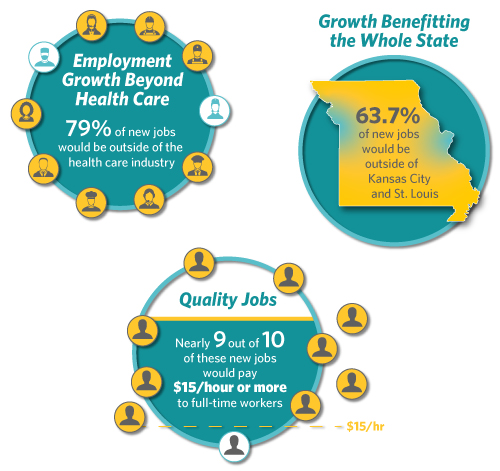 On Tuesday, Aug. 4, Missouri voters will decide whether the state will expand its income eligibility standards for Medicaid, a state-run health insurance plan providing coverage for low-income Missourians. The expanded eligibility was part of the Affordable Care Act, but Missouri has so far chosen to opt out of expanding its income standard to just 138% of the federal poverty level. This equates to less than $18,000 for an individual or $30,000 a year for a family of three.

Advocates for the measure – which now include more than 300 entities - cite economic benefits, health benefits and increased access to healthcare during a pandemic which has strained on our state’s healthcare system and has brought unemployment and economic hardship to many.

More than 300 organizations to date have endorsed the Amendment 2 ballot initiative. The nonpartisan roster of supporters includes the Missouri Chambers of Commerce, the state’s leading business voice; Missouri EMS and Ambulance district associations; and more than 13 national patient advocacy groups, including the Missouri Cancer Society’s Action Network, the American Diabetes Association, the American Heart Association and the American Lung Association.

The Missouri Hospital Association is one of those organizations which has advocated for expansion of the eligibility criteria since the ACA was adopted. Fitzgibbon Hospital is a member organization and, like many rural hospitals in Missouri, has experienced negative economic impacts due to a rising number of uninsured. Since 2014, ten rural hospital have closed, and approximately half of the rural hospitals in Missouri operate in the red. Among the closures close to home are I-70 Hospital in Sweet Springs and Cooper County Hospital in Boonville.

“The sustainability of rural healthcare is at a pivotal point in our state. Medicaid expansion is vital in assuring our hospital continues to provide our community access to quality care right here at home,” said Angy Littrell, MBA, CPA, President and CEO of Fitzgibbon Hospital.

The Amendment 2 ballot initiative would expand eligibility to 138% of the federal poverty level, which means those with an income of just under $18,000 for an individual or $30,000 for a family of three would become eligible for the health insurance program. Because those individuals today are outside the qualification standards for Medicaid, many choose to remain uninsured, with some forgoing needed preventive healthcare. Experts also site the expanded standard would provide assistance for people who may have lost their health insurance, such as those with a chronic health condition or those nearing retirement.

It is estimated that Medicaid eligibility expansion would provide healthcare to more than 230,000 Missourians - including more than 50,000 parents and 18,000 near retirees.

New research compiled by an independent panel of economic analysts commissioned by the Missouri Foundation for Health show that Medicaid expansion will boost Missouri’s economy by creating 16,000 new jobs annually over the first five years, with nearly 80 percent of jobs created outside of healthcare. The resulting impact on the average family is estimated at $500 per year, or an increase in personal income growth across the state of $1.1 billion annually.

Missouri remains one of the few states in the country which has not tapped into the federal funding for Medicaid expansion. Neighboring states of Oklahoma and Nebraska only recently voted to expand Medicaid, while Iowa, Arkansas and Illinois adopted and implemented expanded programs in 2014.

As some opponents cite a perceived increased cost to the state, those states which have chosen to expand their Medicaid eligibility standards actually have experienced the opposite. As is the case with all states, the federal government would pay 90% of the ongoing cost of Medicaid expansion in Missouri. The state budget savings generated by expansion could then be reallocated to other priorities, such as education. Missouri would join 37 other states that have expanded Medicaid, including neighboring Arkansas, where officials reported using savings from expansion to cut state income taxes and reduce payments previously allocated to the uninsured.